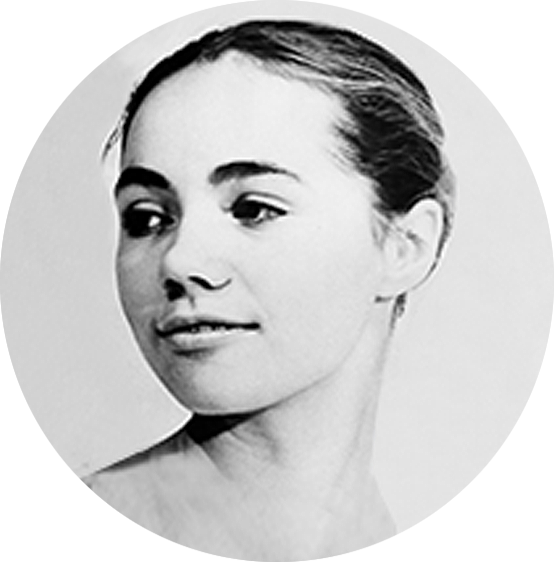 At an early age a future actress got absolutely fascinated by the art of dance and she was truly keen on everything related to it. Fate decreed that her parents would take their daughter of the age of 6 years old to the Palace of Culture named after Kirov to have English lessons in a group.

Every single time she was in the Palace of Culture she spent hours standing by the doors of the ballet studio and secretly glancing at young dancers whose grace and dancing pas greatly impressed her child’s imagination.

Having seen a young fan and her unchildish interest in the art of dance, teacher Lydia Gavrilova (the dancer of the Kirov Theatre) invited her to the ballet class.

Irina got fond of the dance at once, and music especially classical one evoked some motion in her. Due to her persistent interest, her immediateness and excitement, her strong determination to learn how to dance gracefully, for the first time there was a class opened for six-year-olds where Irina Chistyakova started her creative career.

In 1967 Irina Chistyakova entered Vaganova State Academic Choreographic College in Leningrad. Feya Balabina was an art director of the college from 1962 to 1973. She at once noticed a young hopeful dancer.

Irina’s teacher, Honored Artist Alla Chernova asked Feya Balabinato to prepare Kitri’s variation from the last scene of «Don Quixote» for the school concert which was quite unusual for the third year of studies. Such a young fiery Spanish Kitricreated a furore.

One year later a student of choreography faculty in conservatory Boris Eifman staged his first ballet «Towards the Life» to the music of D.B. Kabalevsky with Irina Chistyakova as Soloist. On her first year of studies, while preparing for the International Ballet Competition in Varna, Boris Eifman worked with her at the presentation of the duet from «Gayane» to the music of Aram Khachaturian.

On her first courses, Irina danced Pas de Deux from «Flames of Paris», Pas de deux of Medora and the Slave from «Le Corsaire», the first duet of Shireen and Ferkhad from «A Legend of Love», the part of Kitri from the first scene of «Don Quixote», the Dance with a Snake from «La Bayadère» at school concerts. She participated in graduate performances, she created the parts of Winter and Summer in «The Four Seasons» staged by K.M. Sergeev (who was an art director of the college in 1973), as well as Pas de deux from «Flames of Paris». In the middle of the graduating year, she danced the Pas de deux from «Coppelia».

In 1975 Irina Chistyakova graduated from the college under the direction of Honored Artist Lydia Tyuntina. At the graduate performance for the first time, she danced the Pas de deux «Carnival of Venice» from «Le Diable amoureux» (known as «Satanella»). She was awarded a medal of Malika Sabirova as the first dancer to perform in «Carnival of Venice». Afterwards, it was decided to revive the performance of this part in Vaganova Choreographic College.

In the same year after her graduation from the college, she was taken into the company of the Kirov Theatre of Opera and Ballet (The Mariinsky Theatre).

Her first entrance was a put in a variation of the 4th scene in «Don Quixote». Having performed Pas de deux from «Coppelia» on her first year of work, Irina became a Laureate of the International Youth Festival in Moscow.

During her first two years of work, Irina Chistyakova performed all classical solo variations in all ballet titles from the repertory of the Kirov Theatre. Such Honored Artists worked with her as Nayma Valeevna Baltacheeva, Tatyana Alekhsandrovna Udalenkova, Tatyana Nickolaevna Legat, Gennady Naumovich Selyutsky.

Chistyakova became one of the most popular ballerina, a classical ballet dancer of lyrics-dramatic line not only in Saint-Petersburg but worldwide too. In the Kirov Theatre, she was the First Soloist working with a ballet mistress Honored Artist of the USSR N.A. Kurgapkina.

The first performer of the miniature «The Old Photograph» («Choreographic novels» in 1977 as well as of the part of the Worker’s Female Friend in «The Page from the Past», 1982, Bryancev).

She was awarded a medal of the theatre «Vanemuine» for her performance of the part of Bianca.

In 1982 she won a silver medal at the VI International Ballet Competition in Varna (Bulgaria).

In 1987 Irina danced the part of Gulnare in the first night of «Le Corsaire» on the stage of the Kirov Theatre.

Spectators all over the world highly admire the talent of Irina Chistyakova: in the USA and Holland, in the UK and Germany, France, Italy, Japan, Australia, Korea, Singapore, South America, Spain, Finland, Greece, Norway, Sweden, Ireland and others where she danced with brilliant success.

She performed on the best stages of the world: in Metropolitan Opera, in The Palais Garnier, in La Scala, in the Royal Theatre of Covent Garden etc. as a guest artist.

In the season of 1990-1991, she worked in the theatre company of London City Ballet as a guest First Soloist. There she danced the first night of Cinderella in the ballet of the same name to the music of Gioachino A. Rossini choreographed by William Morgan.

She took part in the international gala concerts «Le Don Des Etoilles» for children in Canada.

In her professional career of a ballet dancer, Irina Chistyakova has performed all the classical repertory which is the pride of the Russian ballet.

At the 200th anniversary of Mariinsky Theatre, she was awarded a medal «For Labour Merit».

In 1989 she starred in TV film-concert«The World of Inspiration».

Since 1990 there were evenings with the ballet dancer staged in Alexandrinsky Theatre, Hermitage Theatre, Baltic House Festival Theatre. There the audience could enjoy the performance of the leading Soloists of Bolshoi Theatre, Stanislavski and Nemirovich-Danchenko Moscow Academic Music Theatre, Kirov Theatre and Mussorgsky Opera and Ballet Theatre.

At the beginning of the 90-s Irina organized her own Benefit in State Pushkin Academy Drama Theater (The Alexandrinsky Theatre) where she danced the part of Aurora - the first scene from «The Sleeping Beauty», Nikya from«La Bayadère» − the act «The World of Shadows», Black Pas de Deux from «Swan Lake», Grand classical Pas de Deux to the music of Daniel Auber, The duet of Esmeralda and Quasimodo «Notre Dame de Paris», Pas de Deux from «Don Quixote».

Among the reviewers who wrote about a great talent of Irina Chistyakova weren’t only Russian prominent connoisseurs of art but also from the USA and many European countries too.

One of the most prominent ballet reviewers of Russia V.M. Gaevsky called her «Ballerina Assoluta» which is the ultimate figure of merit for a ballet dancer. There are a lot of articles of art appreciation written about her where she is described as «a ballerina virtuosa not only regarding her techniques but also her artistic visions. In her well-thought-out roles she gains freedom through precision, her every single dance is a brilliantly performed and choreographed part.» (Inna Sklyarevskaya).

Technical abilities of Irina Chistyakova seem to be unlimited; the most difficult leaps are in her control, as well as«vortex» dynamic spinning and phenomenal steadiness of the posing. Her theatrical characters have a wide range of different lines: starting from lyrics-romantic roles to the dramatic ones and even those of a sharp grotesque.

In 198I Irina Chistyakova initiated a non-repertory company «Rusian Seasons - XXI» which she took over herself.

This non-repertory company by Irina Chistyakova claimed the following ideas as its artistic program: to keep classical heritage and advocacy of the modern ballet art, to discover new actors and ballet-master, to support and develop young talented dancers.

She started her pedagogical career early at college while helping young students on their first years at their parents' request.

Her first teaching experience was in 1973.

In 1999 she started a ballet school-studio which worked for 7 years.

Since 2004 she has been a ballet mistress of Uliana Lopatkina (since 2007 in Mariinsky Theatre).

Since 2007 she has been staging evenings with Uliana Lopatkina in Russia, in Singapore, in Germany, in Italy, in Israel, in Belorussia and in other countries.

She worked on the preparation of mentioned above programs with such outstanding choreographers as Roland Petit, Hans van Manen, Nikolay Androsov, Aleksey Ratmansky; at the same time, she was an assistant of these choreographers in preparing the parts for Uliana Lopatkina.

Irina is the author of the choreographic dance method which helps to avoid any traumas that can be already «developed» during the work process as well as to prevent getting new ones.

This method is based on the traditional school of Agrippina Vaganova and improved with the modern innovations taken from the areas of biomechanics, aerodynamics, and modern studies of biologically anatomical characteristics of the organism.

Irina Chistyakova is the author of her own system of post-traumatic rehabilitative programs based on choreography.

She gave a series of masterclasses in the USA - Hollywood, Ohio, Texas, Michigan.

Irina Chistyakova is an assistant of choreographer Alvar Leymanis at the proprietary production of such ballets as «La Bayadère» и «Raymonda» on the stage of the Latvian National Opera and Ballet Theatre in Riga.

She was a guest teacher of the Latvian National Opera and Ballet Theatre for 4 years and is a juror at the International Competitions in Riga.

At the present moment, Irina Chistyakova is a ballet mistress, an artistic director and an art director of the gala concerts of Uliana Lopatkina as well as she is a president and a founder of CharityFund «The Russian Ballet Heritage».